Hey guys! My camera just arrived and while I have some ideas on what to film I’m also curious to know what you guys would like to see. I definitely have more inspiration for videos than blog posts. It’s easier for me to start rambling on-camera than it is to type it out and video is a medium I’ve always had a soft spot for. While I was big into writing in high school (news editor for the school paper) I was also a part of the broadcasting team and I was set to major in film production before I dropped out. Ha ha ha…

So what would you guys like to see? Anything in particular you would like to pitch? You guys are gonna be the ones to watch it so I don’t wanna just post stuff that only interests me and miss out on cool ideas I’m too unoriginal to think up.

I don’t have any videos yet my work life has been hectic but I bought a nice-ass camera that finally came in and have a free day coming up (this Sunday) which I want to use to film/edit so I can have my channel started up asap!

Thanks for reading and I would appreciate any feedback!

P.S. Have you guys heard about the new YouTube crackdown? Videos with vulgar language/sensitive themes/drug-related/etc. won’t be able to be monetized. That really sucks for those who use it to make a living having to adhere to the above rules. Unless you’re that lady who reviews kids’ toys you’re in a boatload of trouble. I’m a lil nobody so imma be myself and cuss like a sailor. 👽

P.P.S. I’m still working on the channel header I hope to snazz it up but I have a make-do one right now and this is the channel where I’ll be posting: YouTube. I think I linked it right…

I am still freaking out and I am sooo excited omg.

Months ago I reached out to an acting troupe but received no response. I had barely missed their last casting call and I was disappointed because who knew when the next one would be. I figured it was only a yearly thing. Well last month I saw a casting call for the same troupe, a local dinner theatre group, on Facebook and I immediately signed up for an audition. I received my audition time and location and was told I needed no experience (which I do have! quite a bit of hs stuff) so I did zero prepping. Nada. Lmao. It said it would be a cold read.

Last week I showed up to the audition a few minutes late because I’m a procrastinator/lazy ass. I had waited up until that morning to print my resume from the library which was taking an eternity since Gmail was acting up. Then I waited another fifty years for assistance at Walgreens (where I printed my headshot at). FINALLY I headed out and got lost trying to find where the auditions were I kept going in the wrong lot it was like a huge conglomeration of commercial spaces. I finally found a door that said, “Blahblahblah Auditions Here”, ran in, saw two other auditioners and was like, “Are you guys the 2:00 auditions?” Luckily one said yes. The other was a 2:20 but she said she would probably go with us. I filled out the paper they had there for us to write our information down on. A man came out, introduced himself, and told us all three of us could audition together. We were taken into a small room that was only halfway lit and there was a a whiteboard which the man stood in front of. There was a table at the other end of the room pushed up against the wall. He gave us a brief overview of the company and then we started auditioning. Remember when I said they told everyone it was gonna be a cold read? It was Full. Improv. I hate improv. Not because I can’t do it, but because I prefer scripted stuff that I can work on. I like having full control of my inflection, making full character analyses, and having a lot of preparation before going onstage or performing in front of anyone. We went two at a time and my first scene was iffy. I got the archetype correctly but my partner and I’s dialogue was not the best. When it came to my second scene, however, I played the shit out of it. I was broad af. Whenever directors ask for big characters, boy do I deliver. I was definitely more proud of my second scene. Then they told us we were done. That’s it. It was 2 scenes per person I think and they were all two minutes tops. I expected the auditions to run longer and to have some scripted parts but nope. It was 100% improv and very abrupt. The guy asked if we had any questions and we finished up and left. I had mixed feelings about the auditions. I knew I did a good job but when acting is 99% rejection and even the best actors receive it, I knew not to get ahead of myself. I drowned my sorrows in a Wendys frosty.

They had told us we would receive a yes/no through email within 48 hours. The time went by and I kept checking my email and waiting for notifications on my phone. Nothing from them. Should I call? I thought to myself. But then I was like, Okay if they really wanted an actor they would make sure to notify them. I had seen other people post about how they just never heard back from them. I was kind of bummed but I know that acting is 99% rejection. So I was hopeful for the future that, hey, this project didn’t work out but there’s a tons more out there and I’m gonna keep trying. I planned on calling them on Monday, up until I woke up yesterday, Monday, Aug. 1st around 7pm (sleeping in late since I had gotten home that morning at 6am from a weekend trip) and saw I had three new emails. I still had a bit of hope so I immediately clicked the notification, my email popped up, and I saw the most amazing email tagline ever. The title started with “Welcome to Blahblahblah…” I opened it and was congratulated and given the steps I had to take to finalize my acceptance. I was so happy I started sending excited messages to my friend and group chat to share the news. 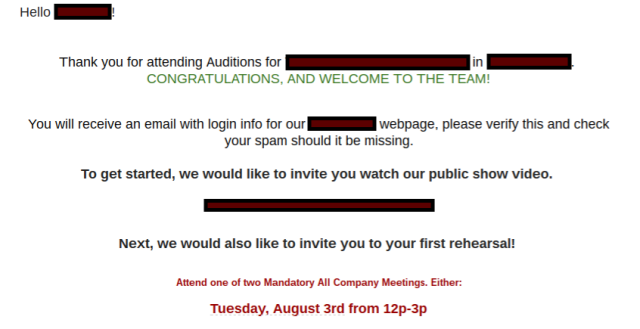 The email gave me a couple forms to fill out – W9 so I could work for them and my direct deposit information for receiving my future paychecks. They linked to a video of a live performance and I watched the hour-long show and got so pumped. Seeing the actors interact with the dinner guests and play broad characters, performing in front of an audience for money, like, that’s going to be me. I am so happy.

The acting business is hard and to nail my first audition and get my first paying acting job on the first try… I am so excited about this project and very hopeful for the future. I plan on giving this job my all. All my acting teachers say that acting should always be about taking risks. I’m glad I took this one.

Hi there! After a couple-year hiatus I'm back! This blog has been turned into a personal blog and I hope to fill it with my personal writings(: -jessika